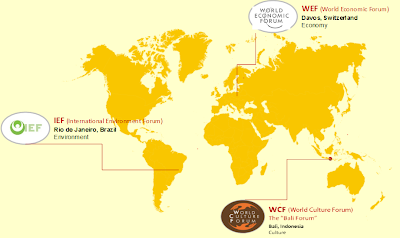 BALI, Indonesia, Nov. 26 (Xinhua) -- The World Culture Forum ( WCF) was closed on Tuesday afternoon with a joint commitment document that calls for measurable, effective role and integration of culture at all levels in the post-2015 development agenda.

According to the document of Bali Promise, participants promised to seek new modality for the valuing and measuring of culture in sustainable developments, developing accountable ethical framework for evidence-based measures of community engagement and stakeholders benefits, fostering new participatory models promoting cultural democracy and social inclusion and fostering the stability in social, political and economic development for nurturing the culture of peace at both local and international levels.

Supporting the leadership of young people in cultural endeavors, promoting local knowledge system in guiding environmental conservation and heritage protection and developing and strengthening productive partnerships among public and private sectors are also included in the Bali Promise.

"We are grateful that we have conducted this inaugural event successfully. The event was featured with high dynamic thought changing among prominent cultural experts. And because this was the first to have been convened, we use promise as the outcome of the event," Muhammad Nuh told a press conference.

The idea to use the power of culture in sustainable development was originally conceived by Indonesian President Susilo Bambang Yudhoyono in 2005. The inaugural WCF event materialized the president's idea, attended by ministerial officials of 16 countries and a total of 800 participants from 65 countries.