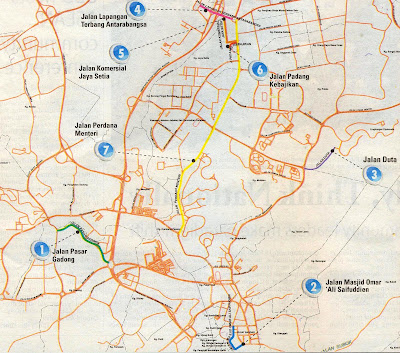 The Bandar Seri Begawan Municipal Council has named several relatively new roads and renamed some of the more established ones recently.

NO.1 : Jalan Pasar Gadong - Starting from the traffic light at Jalan Babu Raja until the exit of the Kiarong roundabout. This one is easy, the road passing in front of the wet market in Gadong.

NO.3 : Jalan Duta - Starting from the traffic light at the Jalan Kebangsaan junction until the exit to Simpang 336. This road at the traffic light simpang 4 near the Immigration and Labour Department was completed a few years ago and most people do not know where it leads to. This road is to help the embassies which are starting to be built around the area.

NO.4: Jalan Lapangan Terbang Berakas. Starting from the main roundabout until the Brunei International Airport. This one is a no brainer.

NO.7 : Jalan Perdana Menteri. Starting from the traffic light at the Jalan Gadong & Jalan Kumbang Pasang untuk the Berakas roundabout. This new road has taken over two major roads. Used to be from the Gadong junction to the Old Airport Junction, the road was known as Jalan Kumbang Pasang and from there, it would be Jalan Berakas. But now that entire stretch is Jalan Perdana Menteri.