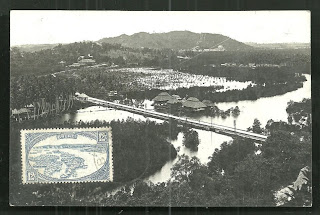 I was surprised when I saw this postcard up for bidding. I thought at first it was a Brunei postcard because of the Brunei stamp but when I look closely, the postcard is that of Kota Kinabalu or better known then as Jesselton. In those days, Sabah was administered by the British Borneo Company and Jesselton was named after Sir Charles Jessel, who was then the Vice Chairman of the company. Jesselton did not become the capital until after the second world war.

This postcard shows the Karamunsing and Hospital Road way back in 1932.