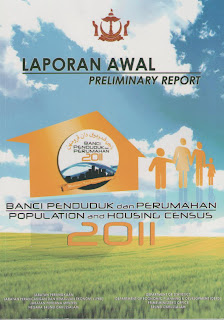 When I arrived at the office today, I saw this book from the Economic Planning and Development Department. This is the preliminary report of Brunei's Population and Housing Census which was done last year. I still remembered the young lady who came over to our house and asked all these questions. I sure hope that half an hour that we gave will contribute towards knowing much more about Brunei.

This book has some interesting data and it leaves a lot of questions as well. Since this is only a preliminary data, I can't wait until the statistics people analyse the detailed data and tell us more things about Brunei.

The major finding is that last year we were just short of 400,000 people. it was 393,162 with 202,668 guys and that leaves 190,494 for the opposite gender. These 393,162 make up 68,208 households thus making each household about 6 people (5.8 to be exact). The most interesting data that is that 81,903 houses and apartments and other living quarters and surprisingly only 65,437 are occupied. One fifth of all houses, apartments and living quarters in Brunei is not occupied! I would love to see those detailed data and imagine the policy implications for building more and more houses by both the government and private sectors.

Anyway, get the book. Go to JPKE and enjoy the preliminary statistics.

Unknown said…
Its very informative and interesting article. All the points are very useful. Simple but very effective writing. Thanks for sharing such a nice post.
apartments chennai
Tuesday, May 15, 2012 9:38:00 PM

Unknown said…
Brunei sounds interesting. I would love to work in Brunei .It sounds like a place to relax and enjoy the climate
Friday, March 22, 2013 7:45:00 PM