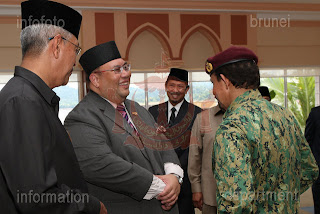 My brother called me up and said that I had a wide smile when His Majesty was talking to me. So I had to search infofoto.gov.bn and found this picture. It was during the Santap at the end of the Majlis Penyerahan Rumah-Rumah Sungai Buloh last Wednesday. His Majesty said that now that I am in the Ministry of Culture, Youth and Sports, I have to start running and do sports!

For those wondering about the infrequent posting latley, let me just say that so many things had been happening over the last two months - highs and lows and in-betweens. My beloved aunty, Hajah Armah binti Haji Mohd Hussein, who has been like a second mother to all of us, her nephews and nieces passed away a month ago. I saw her before I went off to Beijing to attend an International Conference on Women and Sustainable Development and on the day I came back, she was in her final stages. We pray that the Al-Mighty will place her amongst the chosen ones. So, it was with sad heart when I had to fly off again a few days later to Bali for the Informal ASEAN Ministers of Culture and the Arts Meeting and the signing of the ASEAN MOU on Culture during the ASEAN Summit.

Another father figure, Pehin Zakaria, my former Minister of Communications, and from my own Kampong Lambak also passed away not that long ago. I remembered when he was my minister in the 1980s. My wife had been working with him since he was Permanent Secretary at the Ministry of Foreign Affairs way back in the early 1980s until 2005. We pray too that the Al-Mighty will place him among the chosen ones.

Personally, my son recently took his PSR. He improved tremendously over his school exams results. Though he did not get the coveted 5A, his 4A 1B was good enough for me. 17 out of 23 students in his class got the coveted 5A and we congratulate all the 17 as well as the other 6 who just fell short. Our advice is that this is just the beginning and all of you must continue to strive harder for the rest of your school career.

As for me, the move to another Ministry means the 13th time I have been transferred throughout my career. As my other career moves in the past, I hoped that I have done enough at my previous place and leave it a better place before I came in and will hopefully do as well in my new place. MOD now has the new divisions ABCi, LHE, STI and the IIP and a nice SP. I have always been asked how I felt about the move. All I can say is that I will continue to serve the public in whatever ways that I can.

This year has been quite a year tinged with sadness but also with achievements. The Social Media Forum went well. The MIB paper at UBD. The Keynote Address at the Borneo History Seminar. The launch of my third book, OUR BRUNEI HERITAGE. I pray and hope that 2012 will be a much better year. Thank you to my better half, Hajah Nafisah who has been the strong support, my precious little one, Md Nafis for giving joy to us, and to my parents and families who have always been supportive of us.