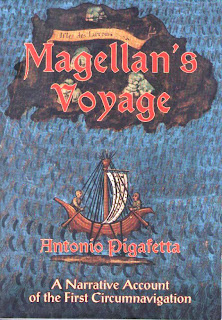 I acquired this book very recently from Amazon.com. Those who do know Brunei history would know why this book is probably one of the most important that you would need to get hold of if you want to know more about Brunei History.

This book entitled 'Magellan's Voyage' described how Magellan's expedition traveled around the world way back in 1519 to 1522.  Ferdinand Magellan was a Portuguese explorer but served King Charles I of Spain to search for a westward route to the Spice Islands (today's Maluku Islands in Indonesia). His expedition of 1519 to 1522 became the first expedition to sail from Atlantic and then into the Pacific Ocean. The expedition was the first to circumnavigate the earth but unfortunately Magellan himself was killed in Mactan in the Philippines.

However the most important man for Brunei was not Magellan. By the time the expedition reached Brunei, Magellan was already dead in Mactan. The most important man was Antonio Pigafetta. Antonio was neither Portuguese or Spanish but he was an Italian who joined Magellan's expedition and wrote an account of what went on in the journey and all the things that he saw.

Luckily for us here in Brunei, the expedition reached Brunei and Antonio Pigafetta was able for the first time, wrote a very accurate of what he saw of Brunei way back in the early 16th century. His description of Kampong Ayer, the Sultan's palace was how we know that even as back as 5 centuries ago, Kampong Ayer was a major metropolis on water. This book is worthwhile to get at a cost of only US$12.95.

Muhamad Najib said…
assalamualaikum, thanks abang rozan for sharing dont forget about ibn batuta as well although he never came to brunei but he is one to be proud of.
Saturday, October 15, 2011 8:35:00 AM