This is an excerpt from the Chinese New Year article which I wrote for Brunei Times 31st January 2011 edition and the photograph from a blog called leafmonkey.blogspot.com who wrote about the same event in Penang in 2006:- 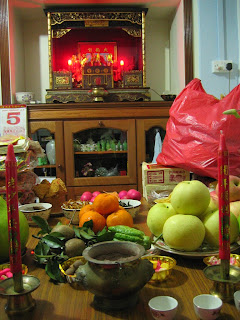 This is the Pai Ti Kong celebrated by the Hokkien Chinese on the eve of the ninth day of the Chinese New Year. The prayers to the heavenly supreme deity Jade Emperor was said to have occurred because of one legend. Three different versions have been told.

One version said to have occurred during the Song Dynasty, was during a time when the Mongolians attacked Southern China. Hokkien or Fujian Province was especially targeted where the Mongols wanted to kill all the inhabitants in the province during that time. It was a time of great fear. What was left of the tribe hid themselves in a sugarcane plantation in the hopes of being spared from the Mongols.

Another version was to have occurred during the 16th century. It was a time when ships abound and there were pirates operating on the east coast of China. On a Chinese New Year during that era, the pirates were raiding the east coast of Fujian Province. These pirates invaded the east coast from all direction and killed everybody who they came across. 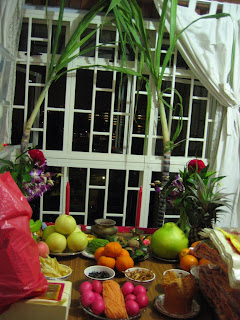 The inhabitants felt so hopeless and were just about to give up, when suddenly, a sugarcane farm suddenly appeared in front of them. They were all saved by keeping themselves hidden in the sugarcane farm. That day was the 9th of the first lunar month. Again, the survivors believed that this was because they had help from the Jade Emperor. In order to present their faithfulness to the Jade Emperor, the Hokkiens started the practice of celebrating on the 9th day of the first lunar month with sugarcane.

The final version involved General Meng. Meng was said to have had a special ability of being able to speak and understand the local dialect simply by drinking the water in that province. During that time, he was assigned to eliminate all non residents in any province. He relied on his special ability to determine if the people were local or outsiders.

During his visit on Fujian Province, his servants mistakenly brought him water from other province. He therefore could not understand the dialect spoken by the Fujian residents. That made him believed that the Fujian residents were outsiders. Based on this he sent an order to kill all the residents. The carnage took place until the ninth day of the first lunar month. He drank the local well water and suddenly mastered the Fujian dialect. It was only then he realized that he had killed the wrong people and stopped the carnage. From then on, Fujian residents rejoiced on that day and believed it was a miracle from the deity Jade Emperor.