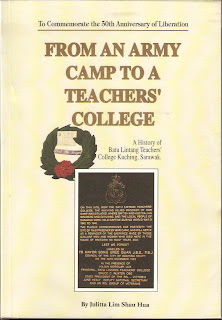 I bought this book at the Sarawak Museum bookshop when I was there in August. Priced at RM85, I thought it was a bit steep at first. After looking through the book, it was a worthwhile buy.

The book written quite sometime ago (1995) is an account of Batu Lintang - how it progressed from being a camp for the British Army towards becoming a Prisoner of War camp for the British and Allied Forces captured by the Japanese and then becoming a Japanese POW camp run by the Allied Forces before finally becoming the Batu Lintang Teachers Training College by the late 1940s.

The book is an interesting account but it does not pretend to cover everything. There are many stories and tales during the harrowing period of the POW camp run by the Japanese that one can read on Wikipedia.

What most Bruneians do not know also is that the association of this camp with Brunei. It housed the Punjab Platoon that was supposed to protect Brunei but in reality only burned the oil rigs from falling to the Japanese (the Japanese managed to stop the fire and acutally managed to get production still), those same soldiers were then captured and kept as POW, some Bruneians who joined as policemen during the Japanese occupation was also kept as prisoners when the Allied Forces occupied Brunei and finally when it became a college, a number of early Brunei teachers were trained there as well as a number of Brunei students (the college also ran a school).