July 10, 2007
[Note: An edited version of the following article was published in The Golden Legacy column in Brunei's national newspaper, The Brunei Times dated 19th May 2007.]

“When the tide rises, the women go in boats through the city selling provisions and necessaries,” Pigafetta, the Italian chronicler with the famous seafaring adventurer Magellan wrote this of Brunei way back in 1521, almost 500 years ago.

As late as the 1980s, every early day along the Brunei River, a visitor to Brunei can see a number of small Brunei sampans called ‘bidars’. These boats were rowed by women vendors with their extra large circular hats moving along up and down the houses along Kampong Ayer. Some of them also plied their wares along the jetties near the capital, Bandar Seri Begawan. These women vendors were known as Padians. 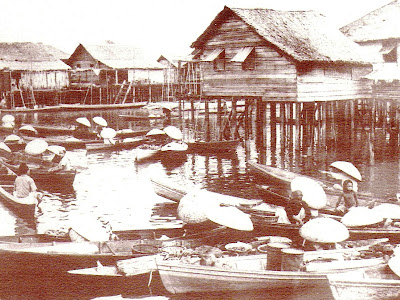 However by the 1980s, the Padians were already a dying breed. In the next 10 years, none would be seen and today, the Padians have become completely extinct only remaining in the memory, paintings and photographs.

For historical reasons, Brunei has remained a seafaring nation and has never colonized much of the dry land. Even the thalasocracy that Brunei created in its heyday was concentrated on controlling trade to the interior at the mouth of the rivers, the entrance to Borneo’s interior parts and backed up by a powerful naval fleet of ships.

The Padians were said to be created by Pateh Berbai who eventually became Sultan Ahmad, Brunei’s second Sultan. In Syair Awang Semaun, Brunei’s contemporary epic poetic legends, it was said that Pateh Berbai got the idea of a floating market selling all sorts of foodstuffs, vegetables and commodities.

With such a big population (even in the 14th century, Brunei’s Kampong Ayer was estimated by Western travelers to consist of some 30,000 households), a big market on land would be difficult to manage. It would be more convenient for the wares to be sold on the boats on water and easier to disperse should there be any troubles or disputes.

However history indicated that it was the pattern of society that led to the development of the Padians. In the Brunei Malay society then, women were prohibited from wandering around freely and it was strictly applied. However food still needed to be purchased and this in turn led to the existence of the Padians. But with women unable to go out, it was a different class of women that did the plying of wares on water.

It was most likely that the first women vendors are indentured slaves (hamba) as only slaves had the liberty to go around at will, rowing a boat from one house to another.

At the same time, stratas in the Brunei Malay society also played an important role. These are in fact reflected in the names of the various villages in Kampong Ayer. The settlements reflected the status of the person as it also indicated the occupational activity of that person. For instance towards the lower part of Kampng Ayer would be mostly fishermen. It was the marketing of fish that most probably contributed to the existence of the Padian. The Padians would be selling their fish and other wares to the other Bruneians.

As time passed, more and more people took up the trade especially widows who quite often had to maintain large families. These women wore large head gear measuring some three to four feet across; although it was umbrella shaped as described by a British writer in 1848. But there were developments too even with the boats changing from a gubang to a bidar.

The Padians declined due to a number of factors. By 1906, the government had opened up the dry land and encouraged many Kampong Ayer residents to migrate to the interior parts. The development of the dry land and the capital brought about the existence of markets and ‘tamus’ or smaller markets. The Padians failed to continue serving as the centre of trade as the markets on dry land developed.

Padians were generally middleman – making a profit from the suppliers by marking up their prices and pocketing the difference. But by then, many of the suppliers brought their wares directly to the markets without going through the Padians.

The Kampong Ayer itself too has changed. Previously houses were isolated and one has to use the small boats to visit each other. However many houses were beginning to be connected via walkways called titians that are built on the river. That made the lanes in between the houses which can be navigated by the Padians becoming too narrow to navigate and some no longer freely available.

Proper shops too were built either on Kampong Ayer itself or in the newly developed town. This is not helped by prices being charged by the Padians not cheaper than in the shops. The high prices were necessary as the cost of their businesses may be higher.

Chinese Hokkien male hawkers were also taking the business away from the padians. These hawkers competed by having larger boats and therefore wider varieties.

The demise of the Padians was in some sense, expected to happen. They just disappeared one by one and eventually today, we don’t see them anymore. But what’s important we should remember that they played an important role in the lifeline and the development of the economy of Brunei over the last 500 years.