May 07, 2007
Before my son underwent his circumcision, he was curious about what will happen. When I related my own experience, I realized mine was different from his. Since then I discovered that in the older days, there were variations to the ceremonies but also variations to which bits to remove.

Circumcision is the procedure that removes the foreskin of the boy's organ. The word is derived from two Latin words meaning 'cut around'. But in Brunei there was a variation to this more than fifty years ago. During the ceremony the ‘penyunat’ – the circumcision master would go to the base of the organ and snip a little nerve which connects to the foreskin. The foreskin as a result would ‘pull back’ thus ‘circumcising’ the boy. Some say this is not true circumcision. However it is ‘bersunat’ as you reached the same objective of not having the foreskin.

There were many variations to the ceremonies. In some, the boys would take a bath where someone would pour scented water over them. In others, the boys would be undergoing a ‘lulut’ - scrubbed with scented powder and water.

After that, the boys would be dressed in ‘baju melayu’ with a ‘kain pelikat’. They might also wear songkoks with decorative motifs known as ‘kopiah berpisnin’.

They would be taken outside to straddle banana tree trunks - the trunks supposedly make one feel cool. In Kampong Ayer, the boys would sit in the lap of their fathers. On some of their foreheads would be smeared a white powdered ‘lulut’.

The penyunat at first would use a ‘sembilu’ which is sharpened bamboo but later on, a sharpened folding type knife to do the procedure. 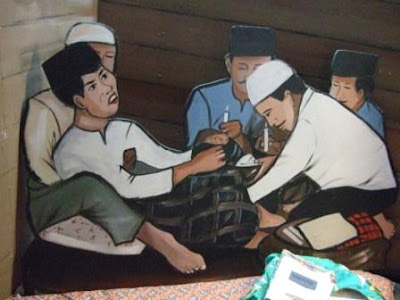 There is no anesthetic. The boys are held by other people so that they can not move. The skin would be stretched out and cut. If the knife is very sharp, there was hardly time to feel pain. Though there have been cases where the boys screamed in pain. In Temburong, the pulled skin will be held by a piece of split bamboo before being cut off.

The cut would be bandaged leaving it to heal. Sometimes powdered coffee beans supposedly with faster healing abilities would be placed on the wound before being bandaged. In most cases, the bandages will only be taken off in a few days time. For the Kampong Ayer boys, they would be asked to go into the water for the bandages to come off.

The cut skins are dealt either by being buried in a piece of cloth with ashes or for Kampong Ayer, the skins are kept in an ash filled coconut shell and floated down the river. Why ashes? It was said that the many instances of people suffering from inability to urinate is due to their skins being ‘disturbed’ by pontianaks. To avoid this, the skins must be in ashes.

After the circumcision, there would be a berzikir ceremony. For the boys, it would be particularly painful as they have to walk around the berzikir crowd getting ‘blessed’ by them.

As usual there were many restrictions. One would be not to step over a ‘lesong’ (stone pestle) fearing the organ would be that size. One practical pantang is not to have ladies walk in front of the boys. In those days, most boys were around 15 before they were circumcised. At 15, the last thing they need is to have stimulating thoughts when recovering from a circumcision.

Fast forward to today. My seven year old son went through the procedure in a very clinical but sterile surgery and done by a doctor. Like three quarters of all boys he had a local anesthetics. He could have chosen a general anesthetics. 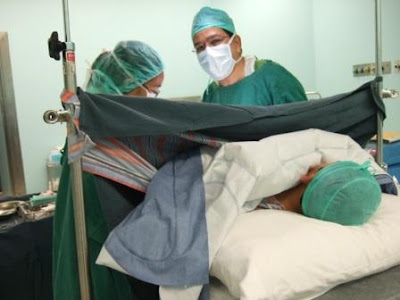 He recovered in two days compared to my father who took a month. Unfortunately my son did not go through any of the traditional ‘manhood’ rites but then the chances of his circumcision turning septic is almost nil which is a fair tradeoff.

But it does not mean that what our elders went through did not teach us anything. Firstly there is the advancement of technology. From crude implements – a ‘sembilu’ to today’s ‘surgical knife’. From no anesthetics to today’s choices of anesthetics. From an ordinary ‘penyunat’ to a ‘doctor’. From being done outside in the open to a sterile operating room. Many things have improved as a result of lessons from the past.

The most important thing our elders left us is the legacy of being a Muslim. No matter how difficult and terrifying it was, the procedures and ceremonies must be undergone in order to comply with the sunnahs. Our elders were brave and they lived in a difficult time. We learnt a lot from what they had undergone.

Note: An edited version of the above article was published in The Golden Legacy column in The Brunei Times dated 24th March 2007.
culture ethnic islam