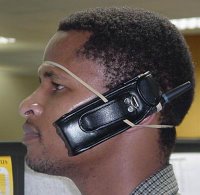 I read somewhere that the American airlines are thinking of allowing passengers talk on their cellphones while they are in flight. You know when I read that I was thinking that at last, someone realised that cellphones do not interfere with navigation systems of aeroplanes! So called safety experts had long worried that cellphones can do that. I will let you into a secret, many of us don't actually switch our cellphones off during flights. For us flying from Brunei, it does not really matter as once you are over open water, there is no network to be connected to but if it is on, you can be automatically linked once your plane flies over land again. I have often thought that it was a bit ridiculous with these multimillion dollar planes, something as small and ubiquitous as a cellphone could interfere with the navigation systems.

Though on the upside of it, having a ban on cellphones can be good too. People don't talk on the phone while they are in aeroplanes for instance. Unless you have the most unfortunate luck of being seated next to or right in front of extremely rude people - which happens surprisingly rarely - air travel is fairly quiet. Air travel is already not exactly the most comfortable of all journeys. The seats are tiny and cramped, the food is okay but nothing much to shout about, the air is dry and most frighteningly we discovered that probably laden with germs as well. So not having to listen to people gabble into their mobile phones at least mitigate or reduce some of the discomfort.

Come to think of it, maintaining the ban on cellphones would actually be to everyone's benefit. Imagine if you are trapped in your seat and have to eavesdrop unintentionally to phone calls to someone who talks on the phone telling his mother about his love life or to a woman quarrelling with her boyfriend. Imagine being seated next to these people for a couple of hours. This can mean yelling and screaming and boasting and complaining for almost all the time you're sealed in that sardine can of an aeroplane. If the ban on cellphones is no longer there, this scenario will become a reality. The only people who will benefit from this is the phone companies. At the moment, I have to admit that it's pretty peaceful.

I don't know whether the removal of this cell phone ban will ever be extended to other flights other than the American sectors. If this was to happen in Brunei, we have a choice of maintaining that ban otherwise I would suggest that we all take our ipods and our headphones because our quiet flight has now turned into a nightmarish market place.

Anonymous said…
Coincidentally, the show Mythbusters recently looked into the Cell Phone on planes Myth. While they could not conclusively test the effects of cell phones on an actual flying plane, they did find out that the instruments used to fly a plane are shielded from interfering signals that could come from a cell phone. Their preliminary test also suggest that cell phones can indeed interfere with an airplane navigation system.

The main reason that cell phones are not allowed to be used on planes is that there is no way to conclusively test that they don't interfere with the airplane navigation especially when new phones are coming out at an alarming rate. Better safe than sorry.
Wednesday, March 29, 2006 8:17:00 AM

Anonymous said…
The use of cellphones has actually only been prohibited during take-off and landing, not during flights. This is apparently what RBA pilots have been told - I asked.
Wednesday, March 29, 2006 7:34:00 PM

FlyBoy said…
From a pilot's point of view, cellphones should be switched off at all times when airborne especially during take-offs and landings because it is during these times that the flight uses plenty of navigational equipment.
From a personal point of view, i reckon if 269 mobile phones are used at the same time in a single aircraft, the navigation system will be disturbed and expect the pilots to question Air Traffic control on the servicability of the navigaion aids used and a possible return back to the point of departure.
Of course, there have been a few occasions where i had accidentally forgotten to switch off my phone but because we were so high in altitude, there was no reception.
Wednesday, May 31, 2006 12:38:00 AM